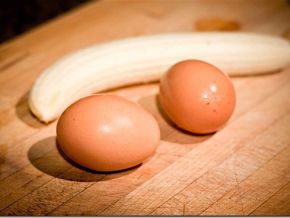 It seems that it is dangerous to eat eggs with banana

According to a popular belief, the mix banana+egg produces a deadly poison which can lead to death on the spot.

"A young man died suddenly after he ate eggs and banana. After some investigations on the reason of his death, people found that the mix egg+banana is the reason for his death…"; everywhere, the message is the same. Many people have read this alarmist message warning against eating banana and eggs at the same time while browsing African forums and social media. The messages claim that the mix produces a deadly poison.

It is a rumor which is gradually becoming an urban legend. Indeed, these messages’ posters, even though they swear every time that they have evidence,  do not back their claims either by credible scientific studies and figures of the number of deaths or, reference works by scholars or even any other serious cautionary statement.

Moreover, the only evidence that exists, on the web, about the alleged hazardous nature of this mix is the one stated in these messages. And, the message is not clear enough to provide evidence on the subject.

To contradict these claims, there are myriad publications which state the energetic power of this banana and eggs as well as some dishes rich in protein and lipids which include both banana and eggs as the ingredient (banana pancakes, banana pudding, banana froth…)

It is a matter of logic; if the mix banana+ egg was as deadly as the messages claim, why could we not identify another victim, apart from the young man, whereas people still eat these together?