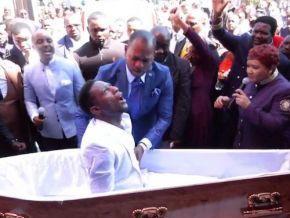 No, this video showing a pastor “bring the dead back to life” was not shot in Cameroon

Rumors suggest this video was shot in Cameroon. True?

A video (in English) showing a pastor ‘resurrecting’ a dead man became viral on social media. The man of God laid his hands on a man in a coffin and repeated some ritualistic phrases and suddenly the supposed dead body got up in the coffin, before the eyes of thousands of people around him. The scene, surrealist, immediately went round the Web.

Some internet users suggest the vid was shot in Cameroon, probably in one of the many gospel churches across the country but that’s a total fake news. The scene actually took place in South Africa during a worship service February 24, 2019 in Johannesburg, local media report. The man behind this “miracle” is Alph Lukau, the highly publicized and controversial pastor and founder of the Protestant church Alleluia Ministries International.

He is considered by the South African media as the richest pastor in the world and often sparks rumors due to his luxurious living condition. The video in question, shared on his Facebook page, was seen more than 1 million times since it was posted February 24.

While some internet users may believe in the “miracle”, others laugh about it and even kicked off the #ResurrectionChallenge on Twitter. A challenge that consists in posting a video and photo imitating the scene. Cameroonian Internet users also took part in the game, including singer Nyangono from the Southern region who has been on the spotlight in recent days with his single “Ça a déjà commence”. “My music also brings the dead back to life,” the singer wrote on a short video published two days ago on his Twitter account.