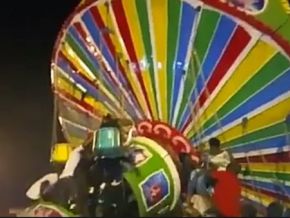 A rumour insinuates that the crash of this fair’s roundabout left some dead yesterday. True?

The crash of the carousel created a deep scare in the public at the Musical, Artistic, Industrial and Commercial Fair (Fomaric) yesterday night. The accident occurred between midnight and 2 AM, witnesses tell us. The big amusement park ride on which over a dozen children and young people were swinging crashed, obviously lacking support from the central beam. This created panic for the people present around this entertainment apparatus.

After collecting their wits, the curious onlookers sought out the victims. Overall, there were people injured but no death, based on corroborating witness statements.

Some injured are currently hospitalised; some for a fracture, others for deep cuts. “Our colleagues asked the partner who set up the roundabout to stop it for the time being”, explains the spokesperson for Fomaric, whose comments were relayed this morning by the pro-government daily Cameroon Tribune.

This was done, but a few minutes later, employees assigned to this roundabout attempted to fix it one last time. The structure was hoisted but it failed once again. “They only focused on one side”, he added. This definitely spiced up this fair which started with pomp this past 8 February. It is scheduled to close this coming 12 March.