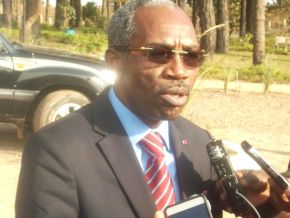 Some people posing as the new wildlife minister to defraud economic operators ?

Just after Jules Doret Ndongo was appointed as Cameroon’s new minister of forest and wildlife, rumors broke out that he has been asking for money from economic operators.

On March 22, 2018,he denied the allegations levelled against him. He confirmed however that for some time now, individuals posing as him or claiming that they were acting on his behalf have been defrauding collaborators, citizens, and economic operators.He adviced everybody to be vigilant and said he was reserving the right to take legal actions against those scammers.