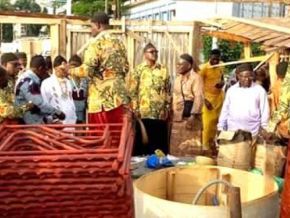 No, the chieftaincy of Canton Bell did not publish the said statement!

A statement allegedly published by the chieftaincy of Canton Bell states the reason why they are against the construction of Um Nyobe monument in Douala. Is the statement legit?

On Saturday, 26, 2018, a statement, allegedly written by the chieftaincy of Canton Bell, was shared on social media explaining the reason why the monument dedicated to Um Nyobe (actually under construction) was destroyed.

Even though the monument was truly destroyed, this statement has not been published by the chieftaincy as it is claimed. This was confirmed by Frédéric Moutome, the communication manager of the Ngondo which is a cultural association of the Sawa. “That being said, a press conference is being prepared to explain the reasons for their action last Saturday”, he commented.

Indeed, that Saturday, early in the morning, about thirty traditional chiefs of Canton Bell destroyed the monument being constructed at Njo Njo roundabout to honor the nationalist Ruben Um Nyobe.

Some chiefs explained that instead of this monument, they want the one honoring Rudolf Duoala Manga Bell, who was hanged in 1914 because he was defending Douala against the German colonizers.

So they are divided on which monument should be erected first. Let’s remind that the construction of the Um Nyobe monument started in April 2018.