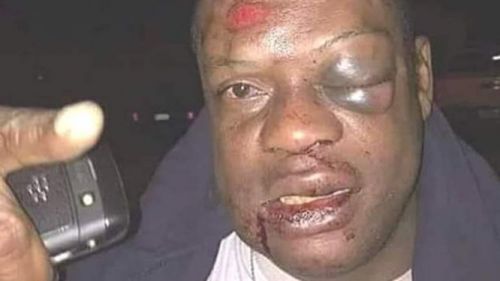 No, the man in this picture was not beaten by Paul Biya’s personal guards

Some people say that the man in the picture is a member of the opposition who was beaten at Intercontinental hotel in Geneva, Switzerland.

A picture is being shared on social media since the week started. According to some people, the man in this picture is a Cameroonian who was beaten by president Biya’s personal guards.

According to the rumors, the man was beaten because he was going to protest against the president at Intercontinental hotel in Geneva, Switzerland.

Our investigation indicates that this picture was posted online a long time ago and that the man is not even a Cameroonian.

A reverse-search on Google reveals that he is from Niger. According to an article published on February 1, 2018, by malisenegal.com, he was beaten for having an illicit affair with a married woman.

The woman’s husband caught the lovers in their matrimonial home and decided to take things into his own hand. He then decided to rearrange the man’s face.

“I did nothing. I was dating a married woman but, when we started, she told me her husband has travelled and is always not around. I just visited her one evening and, as it was late I spent the night there,” the beaten lover said.