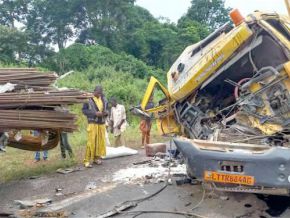 In Cameroon, road accidents kill as many people as malaria. True ?

Given how many people die on the roads, some believe the accidents are more deadly than the disease.

Over the past three months, the number of casualties of road accidents in Cameroon has reached an alarming level. The last week-end only, 8 people died in a car crash involving a bus and a truck at Bomono (Douala). A little farther back, at the beginning of the month of August, about a 100 people died on the Yaounde-Bafoussam-Douala axes. This “death triangle” is part of the reasons why some believe road accidents kill more than malaria in the country. A belief which is wrong.

In fact, data from the National Anti-Malaria Programme shows that in 2016, malaria killed 4,000 people. This is about as much people the Palais des Sports of Yaoundé can receive (5,200 seats). The same year, 1,102 died and thousands more were injured in 3,088 road accidents. The figures were relayed by the National Road Council. Malaria thus killed four times more people than road accidents.

Regardless, the number of deaths in road accidents calls for concern. Here are some of the causes for the incidents: 70% of road accidents are due to mistakes by individuals, 20% due to the bad conditions of vehicles and 10% to that of roads, said Zacharie Ngoumbe, assistant director at the road security office, at the ministry of transport.