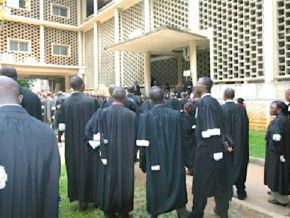 Is it true that lawyers are not buried face-down?

According to a myth, these court officers are buried lying on their back for lying too much. True?

Some people think that lawyers are special human beings. “They lie so much that they might not see God,” a quadragenarian sniggered. She thus explained the legend that wishes lawyers to be buried on their back, not face-down as the common mortals.

In fact, the legend is not practiced.

“I have never seen, nor met someone who has seen, a lawyer buried like all through the fifteen years I have been practicing as a lawyer,” Dr. Daniel Ngos, a lawyer at the high court of Cameroon, said sarcastically. He added that he was also worried about this earlier in his career.

“It seems that lawyers are looked down in Cameroon; this can explain that ridiculous idea. This may have happened somewhere else but here, I cannot confirm,” Dr. Ngos stressed. For a profession which stands for law and justice, the lawyer’s job is not very much well perceived in Cameroon.