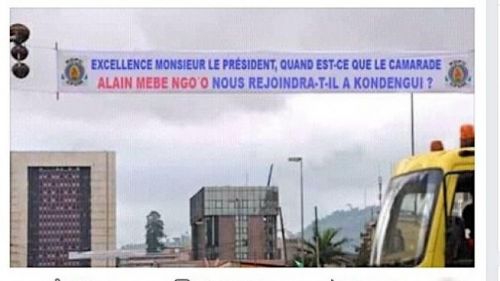 Is this really an unedited picture?

The picture was shared in Cameroonian Facebook groups on March 28, 2018.

Following the arrests in the framework of opération épervier some days ago, this image was shared on Cameroonian Facebook pages and groups. On the image, there was an RDPC banner on which the officials arrested were allegedly addressing a message to Cameroon’s president.  On the banner, it is written: “Excellence monsieur le president, quand est-ce que le camarade Alain Mebe Ngo’o nous rejoindra t-il à Kondengui ?" (Your Excellency, when will Alain Mebe Ngo’o join us at Kondengui ?).

When the image was published, it spurred mixed reactions. Some people mocked the message while others wondered if the banner was really displayed at the Boulevard du 20 Mai.

Truth is that this is an edited image. The real image was shot by AFP’s correspondent, Reinnier Kaze, during a visit of the Nigerian president in Cameroon. It was used by RFI to illustrate a news titled: “Le président nigérian, Muhammadu Buhari, est arrivé au Cameroun” and published on July 29, 2015.

On the unedited image, instead of the RDPC logo at the borders of the banner, there is the Cameroonian map on the left and the Nigerian one on the right. The message was “Le Nigéria, un allié sûr dans la lutte contre le groupe terroriste Boko Haram” (Nigeria, a staunch ally in the fight against the terrorist group Boko Haram).