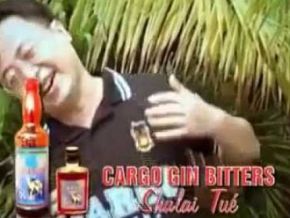 No, this video ad was not shot in Cameroon!

Some people remembering the late Chinese Liu du Kmer claim that the spot was shot in Cameroon. True?

This video is one of the classic bloopers in Ghana. After a brief search, it was revealed that it made the buzz in 2009. It was ordered by Baron Distilleries Ltd which produces (rather used to produce) the whisky Cargo Gin Bitters in Accra, Ghana.

The funny video is now shared in WhatsApp forums animated by Cameroonians and according to some users, it is made in Cameroon. But No!

These assumptions are made because a Cameroon-based Chinese Liu du Kmer used to sing in Duala with a pronounced Chinese accent. However, he died in 2006. The users, therefore, thought that the main actor in the ad video is the new Liu du Kmer, accompanied by the well-known "Bulldozerines" of the Cameroonian singer Guillaume Tell. Those overweight dancers look exactly as those in the video. But this time, it is in Ghana.