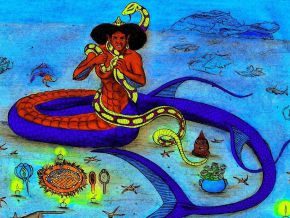 In Cameroon, people still believe in the existence of “Mami Wata”

On the Internet, it is not uncommon to come across traditional practitioners, in Cameroon and elsewhere, who claim they can make one rich by concluding a pact with a Mamy Wata. Often, such pacts are signed at night and involve a number of occult rituals done by the sea.

But what is a Mamy Wata? For her worshipers, she is the goddess of waters, for her victims it is an evil spirit and for the profane, it is a mere myth. It is an atypical character, a supernatural character often present in the legends and beliefs of peoples living by lakes and seas in Cameroon. The goddess of waters, half-woman half-fish, she embodies the crossing of the animal world, the human world and the spiritual world. Often illustrated alongside serpents, she symbolizes supreme power.

Its name originates from Togo and Southern Benin where it is called “Mamui ata”. Meaning "I tighten my legs", the name mutated into "mommy water", "Mammy water" and finally "Mamy wata", which means "Mother of the waters".

Some researchers believe that the "Mamy wata" was already part of African beliefs, before the arrival of the Europeans on the continent. Indeed, it was part of the culture of ethnicities such as the Ibo and the Yoruba of Nigeria (ndi mmili and the Dan cult), the Ewe and Mina of Togo and Benin (the Dan cult of the royal python and the voodoo cult), the coastal populations of Cameroon, the Kongo from the DRC, Congo-Brazaville (mbumba) and Ghana.

However, African beliefs in regards to the divinity were affected during the 15th century as Europeans arrived in Africa, thanks to the stories of their sailors and their ships, which often harbored siren sculptures. It is also said that representation of the mamy wata or “snake charmer” arrived in Africa during the 19th century. Inspired by Hindu goddesses, this representation also influenced Africans’ perception of "Mamy Wata", picturing a character with a face and "human" features.