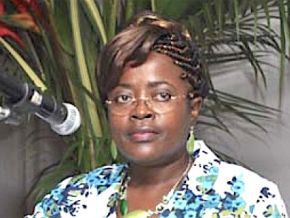 Has the ministry of telecommunications decided to cut internet access to people in the northwest and southwest region starting September 30, 2017?

According to some social media posts, the targeted internet cut will last 48 hours

Has the minister of post and telecommunication, Minette Libom Li Likeng (picture), decided to cut internet the northwest and southwest regions of the country on September 30, 2017? This question must be asked given that various posts on social networks read that, as the ministry of in charge of ICT, “the MINPOSTEL has decided to cut internet access in the Northwest and Southwest regions for 48 hours starting from September 30, 2017”.

However, in a statement published on September 27, 2017, Minette Libom Li Likeng denied the information which has been circulating on social media for some time now.

“The ministry of post and telecommunication categorically refutes those allegations and vigorously denounces to the national and international public, the abuses and manipulations spurred by some irresponsible social media,” the government official wrote.

Ms. Libom Likeng seized “this unfortunate opportunity” to call for vigilance and civic responsibility from the citizens of Cameroon.