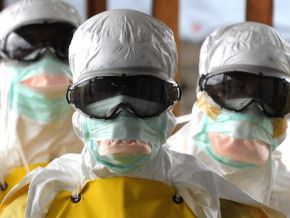 Are there cases of Ebola in Cameroon actually?

According to some rumors, people have died following hemorrhagic fever in the capital.

On January 25, 2018, a rumor has sparked; according to it, there are cases of Ebola in Yaoundé. Such posts like: “Ebola is in Yaoundé”, “Beware, Ebola is actually raging in Yaoundé”, can be read on Facebook. André Mama Fouda, the minister of public health says that there is no such thing.

In a statement published on January 29,2018, he said that between January 8-22, 2018, the central region’s health monitoring and supervision system was notified of three cases of death in a family residing in Yaoundé following acute fever, rash and bleeding; signs which can suggest that it is a hemorrhagic fever.

“One of the family members, whose vital prognosis is not engaged, is actually under medical care in a hospital. The preliminary tests are negative as far as Ebola, Marburg and Lassa fevers are concerned. More in-depth tests are being carried out”, he wrote.

The minister also invited any person suffering from fever followed by rash, with or without bleeding to immediately report to the nearest health center.