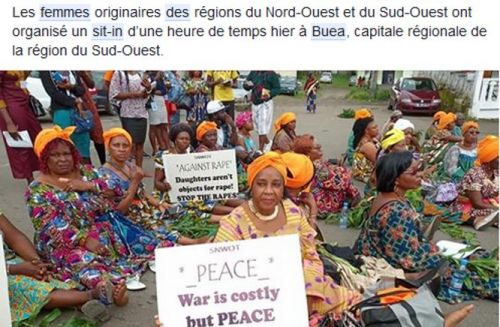 These women reportedly held a meeting sitting on the ground. True?

A hundred women from civil society organizations held a meeting this Wednesday, August 29 at Independence Square (or Bongo Square) in Buea, the South-west region’s capital. They were sitting on the ground. Some journalists reported that they are demanding the return of calm in this part of the country, plagued by a strong Anglophone socio-political crisis.

“They are campaigning for an end to the killings and for school to resume. They said they're tired of burying husbands and children. Tired of seeing their daughters tortured and taken hostage. They called for negotiations to contain the crisis,” said journalist Kum Leonard.

Most of them are members of the Presbyterian Church of Cameroon (EPC), we learned. One of the spokespersons was the wife of the moderator (who acts as the EPC's supervisor) in this area.