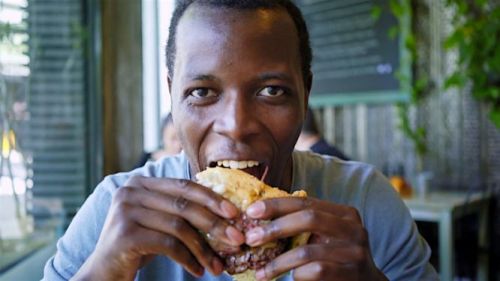 Yes, there are burgers dressed with African sauce !

Even though the concept is recent, it is spreading in Europe.

You would not believe if you hear that burgers are dressed with mafé, Yassa, Mbongo or tomato sauce. Yet it does exist.

It is an initiative of two Cameroonian brothers Freddy and Gaufrey Chokonte who opened a restaurant (named Burger Afro) in Lille, France in 2017.

During the BBC show called Afrique Avenir, they explained that by opening their shops, they mainly opened the fast food for Africans who did not appreciate most of the European foods or Europeans who would like to taste African foods. They then adapted traditional African foods to the world-renowned sandwich.

Burger Afro opens on Fridays and its menu costs between €12 to €15. Instead of the traditional french fries, they offer plantain chips.

Following the brothers’ footsteps, some people have also launched their afroburger shops. This is the case of Régine Nyiratunga and Aline Uwondironda who launched their shops in Belgium in 2017.  In food trucks, the two women offer their menus to Belgians. These menu are notably DG burger, Yassa Burger, Kachu Burger and Ntaba burger.

For those who would like to know how these foods taste, the youtuber FlorianOnAir tasted some and would give you a review. Feel free to visit his channel.