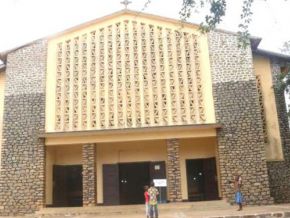 Is it true that the Bafia cathedral was closed due to desecration of Mgr. Bala’s grave?

It is rumored that the Church closed due to Mgr. Bala's grave being desecrated?

Since last Monday, the Bafia cathedral is indeed closed, and this until further notice. On the morning of that day, blood trails were seen on the grave of the deceased bishop of the town, Mgr. Jean-Marie Benoit Bala, who was buried on August 3, 2017.

The grave is within the walls of the church as imposed under the law of the Catholic Church regulating bishops’ burial (unless the deceased before dying decides otherwise). “Blood trail found at the Bafia cathedral goes from the church’s altar to the grave, which is a few meters from the altar,” says a priest at the Cathedral.

“His murder was a ritual one. The culprits therefore thought good to come and finish off their dirty work. This would explain the blood trail,” says another abbey. Before the church reopens, a catholic consecration rite will be made. Meanwhile, before the apostolic administrator (currently acting bishop) allows reopening, services will be held at another location.

Let’s recall that Mgr. Bala was reported missing last May 30. Three days later his body was recovered from a River. Concerning the affair, while government is conducting investigation to clear the suicide theory, the Church firmly sustains it Mgr. Bala was murdered.