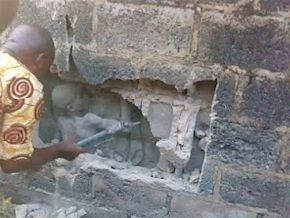 Was a child truly found trapped inside the walls of a house in Cameroon?

It is said that a certain Awono Essomba Joachim set a new witchcraft record by staying inside the walls of an abandonned house. True?

For some days now, an image is being shared on social networks with the following caption: “A new world witchcraft record was set by Awono Essomba Joachim a.k.a Bébéto, native of the Ebamzip par Sa’a village, in the Lékié department (Central region)”. The latter was supposedly found alive inside the walls of an abandonned house. This, is FALSE.

The scene which depicts a child freed from inside a wall in truth took place in Nigeria, in Ondo City State and the story dates from December 2016.

Websites that relayed the event at the time said the boy, 12-year, had spent 3 days inside the wall, shouting for help but not heard.

Finally, the boy was saved and pictures of his rescue were posted on various websites including: https://thesheet.ng/mystery-12-year-old-boy-found-buried-inside-wall-in-ondo-photos/

Regarding how the boy found himself imprisonned, it is yet to be known.

All this said, there is no reason to point at the Lékié department which is known to be “dwelling place of the country’s biggest wizards”.