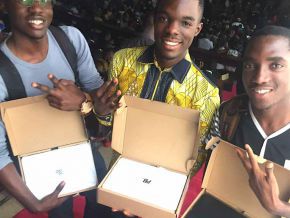 Yes, the netbooks offered by Cameroon’s president have 30 GB of storage capacity

It is said that the storage capacity of this gift from the president is low. True?

Given that the operating system has consumed 17.1 GB of the memory, only 13 GB is left for the beneficiaries to store their files. “Only useful to store a dozen good softwares or movies”, some people commented. Computer literates are denouncing a scam because the budget for this "presidential gift" is officially CFA75 billion.

Some other think that a USB drive will be enough to overcome the storage problem.

As far as he is concerned, the minister of technology is rejoicing because of this gift at the edge of technology. "I must also say that there are technically trustworthy and performing laptops, with an Intel 350M processor, Microsoft Windows 10 as operating system and Microsoft Office 365. It is the latest technology in terms of SSD Drive. Nothing better can be found anywhere else in the world. The president has therefore done what he has promised and he has always said what he is doing”, the minister said at CRTV, the national broadcasting corporation on December 26, 2017.

The distribution will continue in February 2018 in Douala, Buea, and Bamenda. It will be definitely completed in 2019 when the list of beneficiaries will be cleared and the remaining laptops delivered. Complaints from students who were forgotten have started being received on the distribution day.