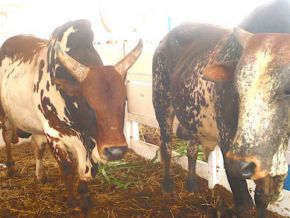 It is said that Boko Haram infected 80,000 cows with cowpox virus

Some people claim that it is better not to eat the meat in provenance from Nigeria.

For a while now, this warning has been circulating on WhatsApp: Boko Haram, the Islamic sect which is wreaking havoc in Northern Cameroon and some neighboring countries could have poisoned 80,000 cows with the "Cow Pox" virus.  To its usual methods, namely bombings, shooting, destruction of properties and kidnapping, Boko Haram may have added bioterrorism. Truth is this message is nothing but a hoax.

It is not based on any message from competent authorities and, it is not endorsed by any official. Yet, the decree n°76/420 of September 14, 1976 (for the regulation of farming, circulation and exploitation of livestock) states that for livestock to transit from another country to Cameroon or from a region to another, one must respect the prescription following: the livestock must use the designed roads, must be followed by herdsmen who hold a certificate (a livestock passport delivered by a sector chief) and sanitary passes as requested by articles 9,10,11,12 and 13 of the decree. Also, a visa stamp can be obtained for the sanitary passes at the different veterinary posts the livestock cross (departure, transit towns, and arrival). Considering these, it is hard to believe that so many infected cows could cross the major towns of Cameroon and reach the markets for consumption without the competent authorities being aware.

Another element to consider is the confusion around the provenance and the type of the cattle. The warning’s issuer mentioned the "poisoning of Northern cattle ", and then warned against eating cattle imported from Nigeria. So, it is time to decide… Are the poisoned animals from the North or from Nigeria? However, the fact remains that a study (Leteneur) conducted in 2008 by the ministry of livestock, of fisheries and animal industries, revealed that 16 cow species are bred in Cameroon, 12 belong to the zebu family and 4 to the taurine.

At last, as far as the virus Cow Pox is concerned, Morand A., Delaigue S., Morand JJ., (Médecine et Santé Tropicales, Vol. 27, N81 Janvier-février-mars 2017) described it as a “pox” of cows which shows through the formation of pustules on the cows’ udder. Humans are infected most of the time by touching infected cats or rats’ udder. In case of human infection, the affected parts are the hands, the necks, or the faces.  The infected individual displays general signs like fever, headaches, myalgia, and asthenia during the first week of infection. However, secondary signs can appear. The healing of the pustules occurs within weeks but, it leaves some traces. Various skin forms, respiratory or visual problems sometimes deadly are observed on immune-deficient or atopic individuals, but these cases are exceptional.