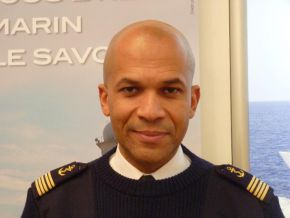 Former ship captain in the France marine, Philippe Ebanga is said to come from Tsang, in the Lékié department, central region.

The atypical story of Philippe Ebanga, former Colonel in the French Army, always sound like a myth to many but it is actually real. Indeed, this man who was in the French marine has his roots in Cameroon where his father comes from. His mother however was from France. In all his interactions with various media, he says he was born in 1966 in Douala, in the Littoral, but his village is located in Tsang, in the Lékié department, in the Central region of Cameroon.

Philippe Ebanga reveals that it is an old passion that led him in 1983, after completing his secondary education at the Joss and Leclerc high schools, to go study at the naval School in France. He rose through the ranks up to the position of ship captain, which is the same as Colonel, the highest senior officer rank before that of general officer.

In 2016, while he was well positioned to become Admiral, he left the Marine to become the new head of the Maritime, Lake and Air Transports Security Department within Total’s Health, Safety and Environment (HSE) Division.