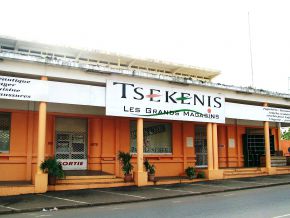 For some months now, many believe the group will shut down. Is this true?

Over the past two months, rumors spread across the country suggest that the Tsekenis group will close since the family business is said to be bankrupt. Indeed, though everything indicates that the firm is going through a difficult period, its management has not officially announced its closure.

In Yaoundé, the company’s store is almost empty, dusty, with only a few employees working, sluggishly that is. A gloomy picture considering that around this period last year, the store was full of school materials. In Douala, Tsekenis’ stores which are located in the Akwa and Bonamoussadi districts are closed and no one answers the calls made to numbers available on the group’s website.

The labour delegation of the central region in Yaoundé says however it is not certain the company will close. “The only sure thing is that they have considerably cut their workforce,” reveals the regional head of the delegation, Rolland Njamsi adding that he has so far received no notice relating Tsekenis’ closure; as required under official procedure. It should be recalled that on September 21, last year, the firm’s staff in Douala went on strike, announcing dark days for the greek company. At the time, the workers were demanding Andreas Tsekenis, son of the group’s founder, Dimitri Tsekenis, to pay their premiums, salaries and improve their working conditions.

Tsekenis launched its activities in Cameroon in 1948 but only had to face competition much later with the arrivals of rivals from France, China, Lebanon, Turkey, etc., who were also specialized in retail and whole sales of house appliances, office tools and equipment, and many more products.