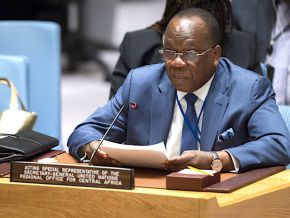 Did the UN encourage Anglophone leaders in back to federalism demand?

According to some, during François Louncény Fall’s 4th visit to Cameroon, the Head of the UN Regional Bureau for Central Africa gave Anglophone leaders approval to create their own State.

At the end of his visit to Cameroon on 13 April 2017, the Special Representative of the Secretary General and Chief of the United Nations Regional Office for Central Africa (UNOCA), François Louncény Fall, met with the Cameroonian authorities and Anglophone leaders. Immediately after his departure, rumours quickly spread om social networks saying that “the UN supports federalism requested by some Anglophones”.

However, just reading the official press release published by UNOCA on 13 April 2017 is sufficient to learn the topics of discussion with both parties. According to the document available online, it is written that François Louncény Fall urged the Cameroonian authorities to diligently assess the difficulties of the population and entrepreneurs in the North-West and South-West Anglophone regions, who have been deprived of internet access since mid-January 2017. “This is a regrettable situation. But I am confident that this important tool of development, communication and collective fulfilment will be gradually re-established throughout the country”, he indicated before leaving Cameroon at the end of his official visit of four days.

“I had positive discussions with all stakeholders”, highlighted François Louncény Fall during a press conference in Yaoundé on 12 April, mentioning his meetings with the General Secretary of the Office of the President (Ferdinand Ngoh Ngoh), the Minister of Justice (Laurent Esso), the Minister of Foreign Relations (M. Lejeune Mbella Mbella) and the National Security General Delegate (Martin Mbarga Nguelé).

Moreover, the UNOCA Chief had the opportunity of meeting with some people arrested and held in relation to the situation in the North-West and South-West, particularly Lawyer Felix Nkongho Agbor Balla and radio host Mancho Bibixy. The legal counsels in charge of their defence and that of other concerned citizens also gave him useful information to understand this case which the United Nations are closely following.

“I urge the Cameroonian government to take all measures deemed appropriate, as soon as possible and within the law’s framework, to create optimum conditions to build the trust necessary to end the crisis”, noted François Louncény Fall. In this perspective, he highlighted that “continuing a sincere and constructive dialogue taking into account what has been established is essential”.

He added that, if needs be, the United Nations are ready to continue “to support this process to contribute to the efforts of the authorities and their partners in the search for consensual and sustainable solutions to this situation”.

But nowhere in UNOCA’s press release is there a mention of coming back to federalism in Cameroon.