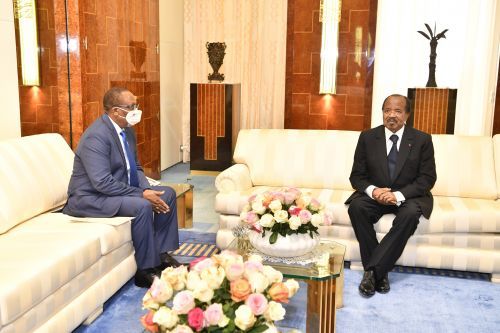 On February 4, 2021, President Paul BIYA granted audience to Ambassador Joseph Keshi, a special envoy of the Nigerian President Muhammadu Buhari. At the end of this audience which lasted about fifteen minutes, the Nigerian envoy said he came "to seek Cameroon's support for Nigeria's candidacy for the post of African Union Commissioner for Peace and Security in the elections scheduled for Saturday, February 6, 2021".

Indeed, the 34th Ordinary Session of the African Union Assembly will be held from February 6 to 7, 2021 (which shall be held virtually, due to the Covid-19 pandemic) for the positions.

Three countries in the race

For the post of Commissioner for Peace and Security of the African Union, Nigeria is in competition with Burundi and especially Algeria, which has been serving at this post almost since the creation of the African Union. The first to occupy the post is the current Algerian Minister of Foreign Affairs, diplomat Ramtane Lamamra, who handed the position to his compatriot Ismaël Chergui in 2013. Now, Algeria intends to renew the latter’s mandate.