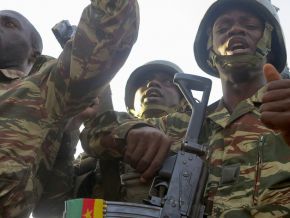 Has the salary of Cameroon’s military men been stopped as rumors claim?

According to rumors in Yaoundé, the salary of military men has not been paid since 2018.

Since January 1, 2018, Cameroon’s military men are panicking. The reason is that some of them claim they have not received their full salary since that date. However, unlike what is being said the salaries have not been stopped.

On January 26, 2018, a message signed by Joseph Beti Assomo, the defense minister informed that there were some inconsistencies in the payments of the salaries of non-commissioned officers; this since January 1, 2018. According to the defense minister, they occurred during the adjustment of January 2018 budget by competent services of the ministry of finance. Due to these inconsistencies, some officials have lost their ranks and rights. He also indicated that the situation is being regularized at the financial department.

Currently, there’s between 26, 000 and 27, 000 military men in Cameroon and for ten years now, the investment and operating budget is between CFA70-110 billion.