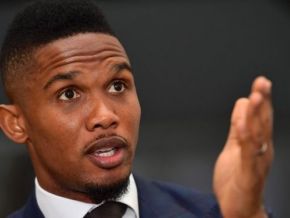 Will Samuel Eto’o really run in the coming presidential election ?

According to rumors, he could be contesting in the coming presidential elections.

Visibly, there are many rumors involving Samuel Eto’o this year. After the one that claimed he was bleaching, and the one according to which he gave 1 and a half million to each Cameroonian repatriated from Lybia, there is this one about his candidacy to the 2018 presidential election.

Indeed, on April 1, around 10 AM, Jeune Afrique published an interview on its Facebook page and website. According to this interview allegedly realized with Samuel Eto’o Fils in Turkey, the player would run for the coming presidential elections in his country. In this interview, he discussed everything, his qualification to run for the presidential, the Anglophone crisis, his government… Even though his answers were a bit humorous, there was no indication that it was just a joke.

This interview was shared thousands of times on social media and even relayed by many media. According to Samuel Eto’o Fils, this interview is not funny at all and the statements were damaging to his honor and pass much false info. So, on his official Facebook page, he required Jeune Afrique which published the interview and France 24 which is one of the media that relayed the interview, to rectify their claims. That same day, Jeune Afrique did not rectify but, in an update, the media added that the interview was just a fiction. On its Facebook page, the media website published a post stating that it was April Fool so, it is just a fictitious interview created by its journalists.