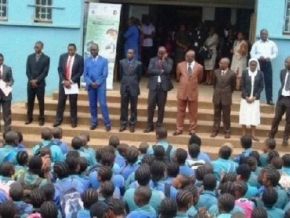 Can people who failed at the baccalaureate exam request to see their papers?

According to the rumour, it is now possible to make a request to receive a copy of your baccalaureate’s papers.

Can those who did not pass the Office du Baccalauréat (OBC – high school leaving certificate) request to see their papers? The answer to this question is “no” contrary to what is currently being said everywhere. This follows a press release signed in April 2017 by Zacharie Mbatsogo, Director at OBC. “The grades achieved by candidates who failed at the 2016 exam session are available via 8070 only for information purposes and not to make any claims. You can check via SMS by sending your registration number and by calling if you have forgotten your registration number. Texting or calling 8070 will cost FCfa 150”, wrote the MD of OBC.

In other words, those who failed to pass the baccalaureate can get their grades but not their exam papers.

The Office du Bac explains that offering the possibility to those who did not pass to get their grades via telephone enables the candidates to do a quick check. Because, in the past, OBC often had to declare, after a full school year, that some students had “passed” after verification, while they had been considered as “failed”. This is what happened for example in 2010. 21 candidates to the baccalaureate initially failed during the announcement of results for that session were finally declared as having passed. This thanks to the routine checks often carried out by the Office du Bac after every exam.

This mistake was however only corrected after almost a full academic year had passed. If the SMS verification system has existed back then, the 21 students would have known their real status much earlier.