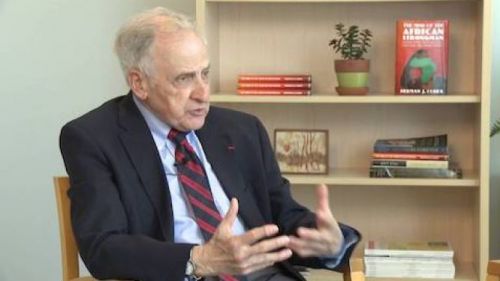 No, Herman Cohen is not the spokesman of the virtual nation “Ambazonia” in Cameroon

Some people claim that the United States Assistant Secretary of State for African Affairs, from 1989 to 1993, is the spokesman of a pro-independent group in Cameroon. Really?

Days ago, in Cameroon, a separatist group claiming to be from the virtual nation of Ambazonia published a note according to which Herman Cohen, the United States Assistant Secretary of State for African Affairs, from 1989 to 1993, has agreed to represent them in negotiations with the Cameroonian government.

However, in a statement published on October 1, 2019, the US embassy in Cameroon provided a sharp denial to this claim. The embassy also clarified the USA’s role in the ongoing national dialogue.

“Herman Cohen, retired high official of the US state department, today, denied the rumors according to which he has agreed to become the spokesman of Ambazonia and stated that he would not be able to take part in the negotiations,” the diplomatic post wrote adding that the USA is a committed partner and friend to Cameroon.

The embassy urged all the parties involved in conflicts in the two anglophone regions of Cameroon to stop the violence and engage in an open dialogue with prerequisites.  “The United States of America is a neutral observer of the process and, even though we offered to be involved in the identification of a possible solution, we needed to be solicited by the two parties before assuming that role,” it added.