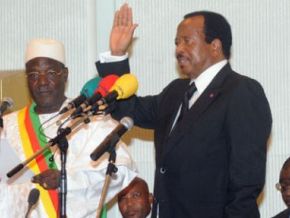 No, Paul Biya's swearing-in date is not yet official

It is said that November 6 was officially selected for the swearing-in ceremony. True?

To date, no official statement has yet been issued about the swearing-in date of Paul Biya, declared the winner of the October 7 presidential polls. The Presidency’s website didn’t even mention the ceremony nor the supposed used day November 6.

Nevertheless, a note from the Secretary General of the ruling RDPC party’s central committee transmitted to party members indicated that the ceremony will indeed be held November 6. “We are going to make November 6 a celebration day, a great celebration,” Jean Nkueté said.

The CRTV state-owned TV news reported yesterday November 1 that an oath could be sworn on the said day “if the date is officially confirmed”.

Let’s note that the November 6 coincides with the anniversary of Paul Biya’s entry to the supreme magistracy in 1982, after his predecessor Ahmadou Ahidjo. That year, he was sworn into office on 6 November, 1982.