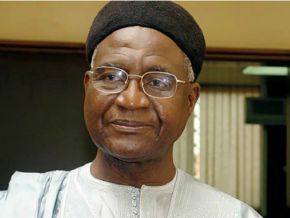 A persistent rumour has it that Bello Bouba Maïgari, Minister of Tourism, has died

Based on a rumour which started social networks on 26 February, the one who is also President of the National Union for Democracy and Progress (UNDP) passed away in the USA as a result of cardiac arrest.

This is the kind of information often described as a “bad joke” or “dark humour”. And this is what happened on 26 February 2017 about the Minister of Transport, Bello Bouba Maïgari. In some households in Yaoundé, it was the topic of discussions: “Bello Bouba has died”. This however could not be further from the truth. The Minister of Tourism and Leisure and also President of the National Union for Democracy and Progress (UNDP) was alive and kicking at that period.

The rumour started from Facebook during this infamous 26 February day. “Bello Bouba Maïgari passed away today in Los Angeles following a cardiac arrest". Serge Eric Epoune, Chief of Communication at the Ministry of Tourism (Mintoul), had to react in the evening by publishing a dissent on the network Facebook: “I would like to contradict here this rumour and reassure the general public that State Minister Bello Bouba is well and truly alive, he was brilliantly reinstated yesterday [25 February 2017] as President of UNDP during a party convention and received well wishes today”.

However, the dissent from Mintoul’s Communication Officer did not stop the crazy rumour. Some continue to spread it even though Mr Bello Bouba is still alive. He is even on a trip abroad. And even less hospitalised.