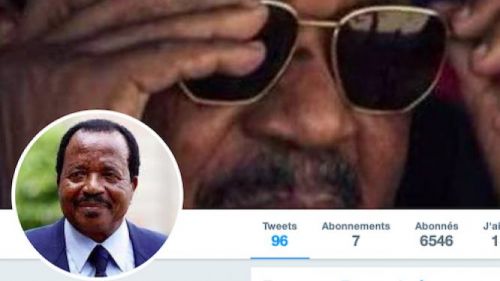 Rumors have it that Cameroon’s president taunted his compatriots using this account. Is it true?

“I’m still at Intercontinental hotel spending your millions. You can still come wreck havoc in Switzerland; I will pay for the damages with your own money,” this is the message published on July 2, 2019 (04:57 pm) by a Twitter account said to be owned by Cameroon’s president Paul Biya. The fact is that the account is fake. Proof of this are the numerous mistakes in the message written in French.

In addition, the president’s official Twitter account is “President Paul BIYA/ @PR_Paul_BIYA”, not “Paul Biya/@biya_paul” as the incriminated account is named. On the official page as at July 2, 2019, posts were all about presidential duty.

The first tweet was about Julie Payette, governor-general of Canada. “I am pleased to address my warmest and heartfelt congratulations to her excellency Julie Payette on the occasion of Canada’s national day,” the president wrote at 11:12 am (Cameroon’s timezone).

At 11: 19 am, Paul Biya also tweeted about his Burundi peer. “The celebration of Burundi’s national day offers a pleasing opportunity to address my warmest congratulations to his Excellency Pierre Nkurunziza,” the tweet read.

At 11: 24 am, the president tweeted about Rwanda’s president in these words: “my warmest and heartfelt congratulations to his excellency Paul Kagame on the occasion of the commemoration of the national day of the Republic of Rwanda.”