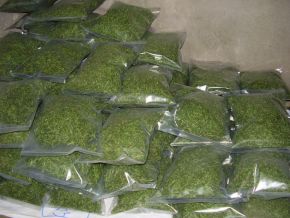 It is said that Gnetum Africanum, commonly known as “Okok” does not grow in the town of Mbalmayo

According to some people, this non-woody product has even disappeared from this town in the Central region.

Does “Gnetum Africanum”, scientific name of the plant commonly referred to as “Okok” or “Eru” in Cameroon grow in the town of Mbalmayo? Some say no in answer to this question. However, the correct answer is: yes Okok grows in Mbalmayo. Indeed, according to studies available at the International Forestry Research Centre (CIFOR), Okok is naturally present in the Central region where Mbalmayo is located.

But CIFOR notes that the legend according to which this non-woody forest product does not grow in the town of Mbalmayo was inspired by the fact that the growing popularity of this vegetable in Cameroon generated concerns on its viability. CIFOR then launched in 2003 a programme encouraging villagers to grow their own “Eru”.

Pierre Ayissi Nanga, President of local NGO Adie (Association pour le développement des initiatives environnementales – Association for the development of environmental initiatives), who supervised the implementation of said programme, declares that the consumption trends for this plant have already been picked up by expatriated Cameroonians living in Europe. “Okok has become a national dish. It is no more a dish associated to ethnic groups in the Central, Eastern and South-West regions”, declares Mr. Ayissi Nanga.

According to CIFOR, the trade of “Gnetum Africanum” represents about 12 million dollars on a yearly basis.