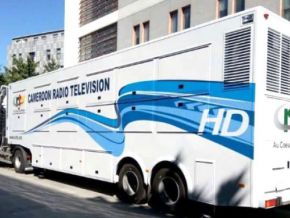 It is said that the amount owed by the Cameroonian public media is FCfa 50 million.

Regulars at the Ministry pf Communication square in Yaoundé must certainly have been surprised to witness in January 2017, a gentleman organising a sit-in. His name is Isidore Modjo and he introduces himself as a technician. The very one who produced the jingles for the 6am, 9am, 1pm and 8pm newscasts on the national news section on the public medias, CRTV. During his sit-in, Mr. Modjo demanded the payments of his copyrights based on the use of his alleged work.

This month, in May 2017, we have a little more information on the demands made by this 54-year old sound engineer. Indeed, in a letter dated 29 March 2017, the General Secretary of the Office of the Prime Minister, Magloire Séraphin Fouda, wrote to the Minister of Communication, Issa Tchiroma Bakary. Subject: “Finalising the contract and payment of broadcasting rights for the works of Mister Isidore Modjo by CRTV”.

Magloire Séraphin Fouda wrote: “Following the inter-ministry meeting held on 25 January 2017 on the above-mentioned subject, the Prime Minister tasked me with requesting from you that you instruct the Managing Director of CRTV to finalise the attached contract project and pay to Mister Isidore Modjo FCfa fifty million (50,000,000), as soon as possible, in exchange for the definitive and exclusive transfer of all copyrights related to his works used by CRTV”.

After reading the letter from the office of the Prime Minister, it becomes apparent that Mr. Modjo is in the truth: CRTV owes him money. “It was certainly an informal partnership at the time of former Managing Director Gervais Mendo Ze [now in prison in relation to a case of alleged misappropriation of public funds], but the law dating back to 2000 on copyrights states that when a station broadcasts your work, they must pay your copyrights”, repeats the plaintiff. Who announces that he will resume his sit-in on 4 May 2017 as he has still not been paid.