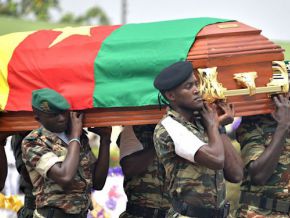 Based on popular rumours, the Cameroonian Head of State is insensitive to the deaths registered among the armed forces in the Extreme-North.

Paul Biya just contradicted the legend according to which, he has a phobia of paying tribute to soldiers who died in the war started by Cameroon since 2014 against the sect Boko Haram. “Maybe his witch doctor banned him from seeing dead people”. “He is afraid of dead people”, one can often hear in whispers about Mr Biya.

The Head of State however presided on 3 February 2017 in Yaoundé over a dedication ceremony honouring four officers who passed away in a helicopter crash in Bogo, in the Extreme-North.

These soldiers were returning from a frontline mission against the Nigerian Islamist sect when their aircraft crashed. They are General Jacob Kodji, Colonel Alphonse Nkameni, Lieutenants Brice Chinda and Souloukna Ngrassou. It is indeed a first since 2014. Indeed, Jacob Kodji is the first Cameroonian general fallen on the front since the start of the operations.

Amnesty International, a global movement defending human rights, indicates that between July 2015 and July 2016, Boko Haram perpetrated 46 suicide attacks, in the Extreme-North region of Cameroon, killing over 500 civilians. Within the Cameroonian security forces, highlights Amnesty, 67 people have also been killed since 2014.