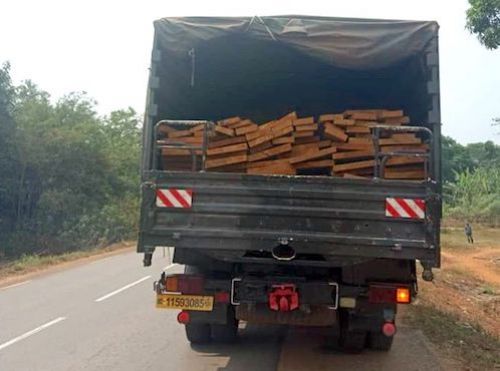 No, the soldier questioned in Mbandjock on January 28, 2020, was not a wood smuggler

It seems when he was stopped by local authorities, this soldier was carrying timber logs at the back of his truck.

Here are some comments released in response to the video: "We caught a military man trafficking wood"; "A man in a uniform wanted to bribe the Water and Forestry agent," etc.

However, the rumors were denied by Jules Doret Ndongo, the Minister of Forests and Wildlife (Minfof). "A misunderstanding that occurred on January 28, 2020, between an agent of the administration in charge of forests and a soldier of the Presidential Guard at the control gate of the locality of Mbandjock in Upper Sanaga was filmed in a video, and widely distributed  on social networks," explains the minister.

The official reveals that in view of the conclusions of the investigations conducted by the General Inspectorate of the Ministry on this case, the Minfof deplores "this unfortunate incident which should have never occurred during a regular, legal, acquisition of timber for the Presidential Guard Training Centre."