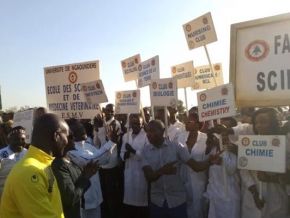 No, this is not a political protest in Adamaoua, but rather a student strike

Rumors suggest the video features a political demonstration in Adamaoua

No, “young people in Adamaoua” didn’t protest. The video rather featured a strike of the students of the science and veterinary medicine department (ESMV), which kicked off in late November and lasted until December 5. ESMV is part of the Ngaoundéré Université.

As the video showed, students wore white lab coats demanding change in their department. “We are sick and tired, we want change,” they said.

“They (students) said they are fed up with promises, they want immediate actions, concrete solutions, to resume school,” a Ngaoundéré journalist informed.

Before their strike, a prior notice signed by the ESMV Student's Association Chairman, addressed to the rector expressed discontent and demands to be met either in the long, mid or short term. They want more classrooms, upgraded IT unit, and study trips.

ESMV was created by a presidential decree in January 1993 and was officially launched in October 2007. Since classes effectively started in February 2008, the school has been struggling to become a major academic excellence center.