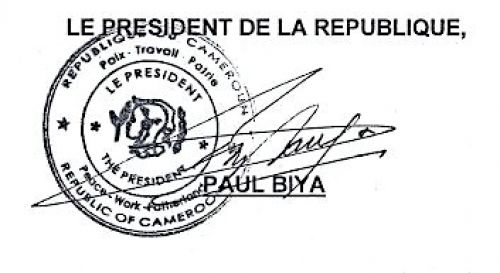 Yes, the constitution allows the president of the republic to delegate his signature to the general secretary of the presidency

According to the constitution, the president’s signature delegation is not an abdication.

Currently, a presidential decree is being derailed in Cameroon. It was signed by the head of state in February 2019 for permanent delegation of the head of state Paul Biya’s signature to the general secretary of the Presidency Ferdinand Ngoh Ngoh. For some people, this delegation is unconstitutional and for others, it appears like a resignation act committed by the president.

Looking at Cameroon’s official journal it appears that since December 14, 2011, the president had made a signature delegation to Ferdinand Ngoh Ngoh.

A credible source at the presidency explains that the February 2019 decree is just a legal formalism because Ferdinand Ngoh Ngoh has been nominated as the minister of state, the decree of December 2011 was rescinded.

In his book Le Secrétaire général de la présidence de la République au Cameroun : Entre mythes, textes et réalités, Jean Marie Atangana Mebara, secretary general of the presidency from 2002 to 2006, explains that "the constitution provides that the president of the republic exerts regulatory power, i.e to make decrees for the implementation of the promulgated laws… The Head of state can delegate part of his power to the prime minister (…) or the defence minister. These delegations are made via decrees signed by the president of the republic. They are impersonal because they are not granted to the people in that position at the time but to all those who will assume the position," from the time the decree is signed till it is rescinded.

The former secretary general indicates that as an assistant to the president, a permanent signature delegation is granted for some administrative acts but it is not a delegation of powers.

On September 22, 1994, a delegation of signature was signed for the general secretary of the presidency at the time Titus Edzoa. He was habilitated by president Paul Biya to negotiate and sign agreements with third-parties for the payment of Bank of Credit and Commerce Cameroon’s debts.