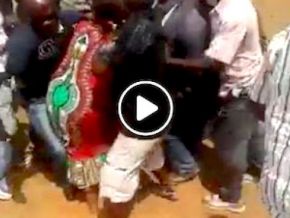 No, this fighting scene has no link with Cameroon!

It compelled some people to say that these fights between civilians and policemen happened during the October 7, 2018, presidential election. Is that true?

A video extensively shared shows civilians fighting with policemen over a voting poll and many people immediately thought this scene took place in Cameroon during the recent presidential election but no!

Let’s first mention that the attire worn by the policemen in that video is Gabon’s, not Cameroon's. Secondly, the video was shot before October 7, 2018. Besides, it was posted on October 2, on a really aggressive Gabonese facebook page named "ça passe ou ça casse" (hit or miss).

The video was illustrating statements attributed to Jean Eyeghé Ndong, former president of Gabon who became a fierce challenger to the president Ali Bongo. "Someone who cheated during the presidential election will also cheat at the legislative", the legend of the picture accompanying the post read.

This makes believe that the author of that post (Mboulou Kokou) who is at the same time administrator of the above-mentioned Facebook page was warning against fraud during legislative elections in his country, Gabon (held on October 6, 2018).