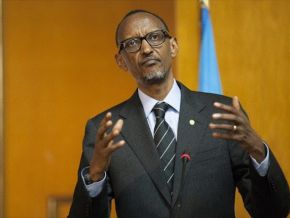 “Paul Biya cannot be recognized winner of the 2018 presidential polls in Cameroon without a vote recount with African Union observers,” this is what Rwanda’s President Paul Kagame supposedly said according to posts being shared on social networks. But this statement is false. Instead, Mr. Kagame sent a congratulatory message in English to his Cameroonian counterpart.

Indeed, the Rwandan Head of State was among the first personalities to congratulate Paul Biya on his re-election (71.28% of the votes) at the end of the presidential election on 7 October 2018. Following the announcement of the election results by the Constitutional Council on 22 October, Paul Kagame sent an official letter of congratulations to his counterpart the same day.

“Your Excellency, on the occasion of your re-election as President of the Republic of Cameroon, I extend to you, on behalf of the Government and people of Rwanda, and on my own behalf, warm congratulations and best wishes,” President Kagame wrote.

He added that he takes the opportunity to reassure Mr. Biya of his commitment to strengthening the excellent relations that exist between their countries and people, and looks forward to future bilateral and multilateral partnerships.