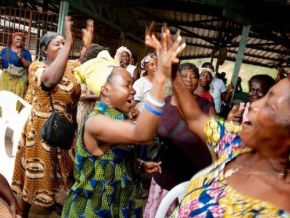 Has a new chairman been elected for CPP?

It is said that there is a new president for Cameroon People’s Party. True?

A note sent to the ministry of territorial administration informed that the new national coordinator of Cameroon People’s Party is Jean Roger Gerald Ndebi. The note was signed by Tita Samuel Fon who introduced himself as the new chairman, instead of Edith Kah Walla.

Today, a press statement signed by Edith Kah Walla informs that « Mr. Tita Samuel, one of the party’s founding members has been suspended till the next disciplinary council. The national council recommends that another meeting of the said council be held to examine the case of Tita Samuel Fon ».

Kah Walla also adds that “apart from the congress, only the national council can define the party’s political direction”.

According to an observer of the political scene, this could be an instrumented show to force CPP to run for the 4 coming elections namely, the senatorial, the legislatives, the municipals and presidential.

Indeed, since 2011, Kah Walla always said that the party won’t run for Cameroon’s elections due to the current electoral system which does not guarantee a democratic and inclusive election.