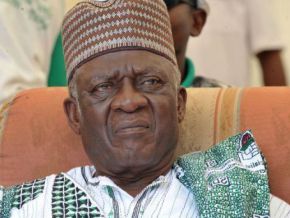 Is Ni John Fru Ndi, the opposition leader in Cameroon, a defector from RDPC, the ruling party?

Legend has it that the National President of the Social Democratic Front (SDF) was even an elected representative of the Rassemblement démocratique du peuple camerounais (RDPC -Cameroonian Democratic Congress).

The Chairman of the Social Democratic Front (SDF), Ni John Fru Ndi, opposition leader in Cameroon since May 1990 was a member of the ruling party, the Rassemblement Démocratique du Peuple Camerounais (RDPC). This is what the legend says in Cameroon.

Searching through Ni John Fru Ndi’s past, we indeed noticed that he was defector from the currently ruling party. Indeed, John Fru Ndi, born on 7 July 1941 in Baba II (North-West), started his professional career as a newspaper seller on the main street of Bamenda.

The Baba II native is a fighter who soon became the representative in Cameroon of the group Philip Morris in the 60’s, then manager of a company importing material for scientists. He made enough money to open an agro-industrial complex in Obang, on the Bamenda-Wum road. But, it was with the creation in the early 70’s of a network of bookshops, Ebibi Group of Bookshops which he managed, that he truly became wealthy.

John Fru Ndi became one of the important men in the North-West province. He was even chosen as President of the local football team, PWD in Bamenda.

The Rassemblement Démocratique du Peuple Camerounais (RDPC) was then founded in Bamenda in 1985. The bookshop owner enters the political scene as a member of the ruling RDPC, quickly changed sides, after failing to make a niche for himself.

A RDPC town councillor in Bamenda from 1987 to 1990, he does not succeed in getting elected president of the Mezam section against Simon Achidi, or getting a seat in Parliament. Off to the opposition. He then created SDF in May 1990.