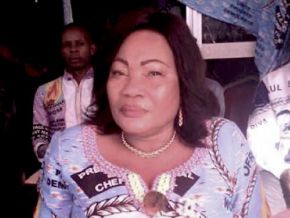 Was Suzanne Julie Fatchom the wife of Maurice Kamto, a member of the opposition party photographed wearing the attires of the ruling party RDPC?

A picture of the wife of MRC’s chairman could be circulating right now on the internet.

A picture depicting a woman wearing the attires of Cameroon’s ruling party (Rassemblement démocratique du peuple camerounais-RDPC) is being shared on social media.

Many users mistakenly identified that woman as Suzanne Julie Fatchom Wega, the wife of Maurice Kamto, leader of the opposition party, the MRC. In fact, it is Amougou Noma, member of RDPC and governing mayor of Yaoundé 4.

As a matter of fact, this confusion around the picture is the result of the promotion, on November 7, 2017, of Ms. Kamto who was formerly a minister plenipotentiary at the ministry of foreign affairs. She has been promoted to the grade of inspector general at the ministry by Paul Biya, the President of Cameroon. Before that, she was in charge of the relations with Europe.