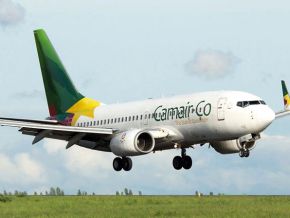 None of Camair-Co’s planes caught fire during its flight

According to the rumor, the emergency landing made by one of the state-owned airline company’s plane was due to a fire outbreak. Is it true?

Rumors claim that due to a fire outbreak, a Camair-Co plane going from Maroua to Yaoundé was obliged to make an emergency landing on April 4, 2019, in Garoua.

According to sources within Camair-co, it was not a fire outbreak. It was rather a "technical problem". "There was an issue with the ventilation system so, there was light smoke inside the plane. The pilot applied the produce which recommends that in case of an incident, the plane should land at the nearest airport which is Garoua, ” the sources indicate.

The management, however, has decided not to publish a statement dispelling the claims.

"Incidents like that are common in the aviation industry", our sources say. Indeed, in their day to day activities, airlines companies are confronted with various technical problems. To address such problems, they carry out regular and rigorous checks.

"We have conducted the required checks. The plane is still operational," the sources continued. The said plane is a 50-seater built by Brazilian Embraer. It was leased from an Equatorial Guinean company  Cronos.