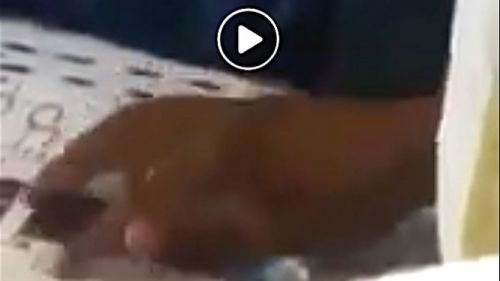 No, this fraudulent video has nothing to do with North Cameroon

In a video extensively shared, some men are seen cheating during an election. Are those men from Elecam?

It has been two days now since a video suggesting that there was fraud during the elections in North Cameroon was being shared on social media. In the video, two men wearing robes (one in ivory white robe and the other in a midnight blue one) and cap (keffieh or turbans) are seen. Visibly, they are men in charge of the management of an election. The man in ivory white robe is busy going through voters’ profiles on electoral lists in front of him and marking them with his fingerprint while the second man was signing some lists. Those sharing the video indicate that the scene took place in North Cameroon due probably to the attires of those men. However, this scene did not happen in Cameroon.

First, though ELECAM, the institution in charge of elections in Cameroon has introduced a new element (because of biometry) that is a national list with voters’ reference and picture, the lists used during the October 7 election were in black and white instead of the colored lists shown in the video.

The second element is the abbreviations M.A.T.D and G.D.E  marked vertically on each of the pages that the agent has been going through. Those abbreviations stand for Ministère de l’Administration territoriale et de la décentralisation and Direction Générale des élections in Mali (two institutions in charge of elections in that country). In addition lists similar to the one on which the wrongful agent is stamping his fingerprint can be seen in this video-report (0:15 to 0:21) shot by TV5 Monde about the presidential election that was held last August in Mali.

The third element that completely proves that the video has no link to Cameroon is that the said video surfaced for the first time on Facebook after the presidential election in Mali. It was published, on August 16, 2018, about two months before the presidential elections in Cameroon, by Akilisô, a facebook page for African news and entertainment. The legend of this video was  #MALI: ELECTION PRESIDENTIELLE: FRAUDE MASSIVE (Mali : Massive fraud during the presidential election) : "In the North of Mali where #IBK won many votes, here are some voters voting for dozens, even hundreds of  registered voters ! Is that what our dear obeservers of @moeuemali18 and #UA call "acceptable conditions”?.

On October 19, 2018, a second video titled "Fraud during presidential elections in Mali" surfaced showing the same two men. In that video, the man in an ivory white robe is giving ballot paper (without envelope) to a third man who is signing and seems to be stuffing urns.