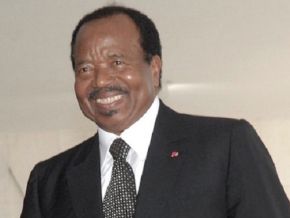 The central committee of RDPC, the ruling party, did not ask Paul Biya not to run for the 2018 presidential election

A document shared on social media and in diplomatic representations claims that the RDPC does not want Paul Biya to run for the coming presidential election.

No official of the ruling party has called on Paul Biya not to run for 2018 presidential election.

The communiqué read: “a fake statement allegedly signed by members of the political bureau of the central committee, high officials and heads of the central committee’s general secretary, asking Paul Biya, national president of RDPC, not to run for the coming presidential election, is being shared on social media and in diplomatic representations”.

Jacques Fame Ndongo confirmed that it is a fake document which is part of a vast and gross campaign of disinformation and manipulation.

He thinks that some people want to “bring down the morale of the partisans” of his party in face of their strong support to Cameroon’s president "in the unswerving and victorious combats he is leading for peace, national unity and improvement of the living conditions of our compatriots”.