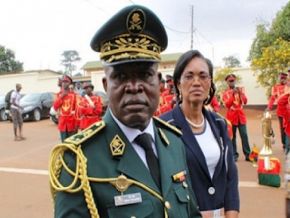 No, brigadier general Valère Nka is not dead

Persistent rumors have it that the high-ranking Cameroonian officer died during the fight against Boko Haram. Really?

Brigadier general Valère Nka is not dead as rumors claimed last weekend. Colonel Didier Badjeck, former communications manager at the ministry of defence, informs that “this rumor is similar to the one announcing the death of general Bouba Dobékréo three weeks ago.” Didier Badjeck explains that these rumors are aimed at destabilizing the top military chiefs in combat zones.

“We want to dispell this rumor. Brigadier general Nka Valère is healthy and performing his daily activities with patriotism. Authors of such horrible jokes should stop joking about the army which is loyal to its chiefs and determined to carry out their duties,”  colonel Badjeck said.

Brigadier general Valère Nka was nominated in February 2017 (as an interim replacement to Jacob Kodji who died days earlier in a plane crash with three officers while coming from an operation) to be the head of the fourth joint military team (Rmia4) in the Far North.  Rmia4 coordinates the fight against the Islamist sect Boko Haram.