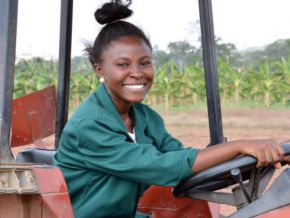 It seems like Cameroonian youth are reluctant about agro-pastoral activities

According to a popular refrain Cameroonian youth dislike working on the land.

In a paraphrased way, there is a Cameroonian adage that says young people do not like to dirty their hands working the land. And it is not false to say so. As, the Centre of Analysis and Research on Social and Economic Policies (Centre d’Analyse et de Recherche sur les Politiques Économiques et Sociales - CAMERCAP) shows in a study published in this month of May 2017 that the preferences of young people involved in agro-pastoral activities depend on the characteristics of the activity (length of the production cycle, initial investment, drudgery, ...) and the degree of organisation of the players. That is to say, the existence of supervisory structures and supply of services, notably producer organisations and other public support bodies.

"With the exception of  some agricultural and breeding activities with a short cycle (growing pineapples, tomatoes, onions, raising poultry, rabbits, guinea pigs, etc), young people remain reticent about getting involved in agro-pastoral sectors even though they have been identified as being areas of employment.", notes CAMERCAP. Which reveals that these agro-pastoral sectors are ignored because they are hardly mechanised and require an important initial capital in terms of prepared land, buildings and production, harvesting and processing equipment.

Furthermore, adds CAMERCAP, these activities need the mobilisation of substantial working capital not always available to young people. Likewise, the value chains remain poorly developed notably a feeble inclusion of innovative segments (production and propagation of seeds, packaging, processing and electronic marketing...). This limits diversification of activities, notably those which meet their aspiration the best and offer opportunities to young people in the job market.

CAMERCAP notes that, the launch of several programmes notably for growing cocoa , plantain, corn, cassava, potatoes and fruit trees resulted in a surge of young people in activities to reproduce seeds of improved plants. "Unfortunately, the absence of a sustainable strategy to consolidate the achievements did not allow these initiatives of the young people working in the activities of reproducing seeds of improved plants to be capitalized", notes the study entitled "Profiles and Preferences of Young People regarding Employment in Cameroon".