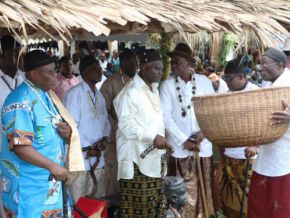 History says only one German-Duala treaty was signed on July 12, 1884. True?

History books say an agreement was signed on that day by sawa kings and German emissaries to whom they gave their administrative power. True?

As the commemoration of the July 12, 1884 German-Duala treaty to open Cameroon to Germany approaches, a debate has emerged. Prince Kum'a Ndumbe III, a history professor, who is at the source of the debate, claims to that there was not only one treaty opening Cameroon to the European industrial administration. "There has not been one, but about 95 sovereignty transfer treaties", the Head of Afric Avenir Foundation (based in Douala) tells media and reveals also online in a document.

In the document, Kum'a Ndumbe III underlines the conditions of these agreements between the kings of the Duala territory (latter called Cameroons) and the German traders commissioned by Chancellor Bismark.

We hear that "several internal wars shook the authority of the potentates of "Cameroons". Hence, on August 7, 1879, King Akwa sent a letter to the Queen of England requesting the application of English laws with a British administration on its territory. King Bell will do the same on March 8, 1881, and the two will sign a joint request on November 6, 1881. But neither wanted annexation nor colonization, but a transfer of sovereignty that would not deprive the kings of most of their power".

In the face of England’s hesitation, Germany took the lead. Despite the fact that the July 12 treaties are the most important, politically, it should not hinder the fact that before, and after, they were signed, many kings across the country, against money, gave out important lands, economic and political rights to the Germans.

Truly, the first transfer of sovereignty treaty in the "Cameroons" was signed by Jim Ekwala and King Dido (Deido), on July 11th, 1884, Kum'a Ndumbe reveals. However, this treaty was not approved by all kings at the time. Kum'a Ndumbe II intends to continue his advocacy during a press conference on Tuesday July 11th, at his foundation which is located in the Bonabéri area, in Douala.