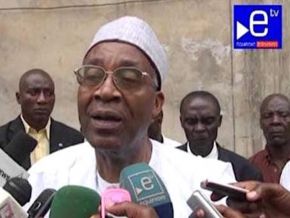 No, Ndam Njoya has not claimed his victory on Equinoxe Tv

It is said that this image was shot during a recent press conference of the president of Cameroonian Democratic Union, during which the president was claiming victory for the presidential election. True?

This image of Adamou Ndam Njoya speaking on Equinoxe TV, being shared, dates back to June 2013.

So, it could not be linked to an alleged recent interview with the president of Cameroonian Democratic Union-UDC. Neither could this image be linked to a victory assertion (like the MRC of Maurice Kamto and Univers of Cabral) after last October 7 elections.

Indeed, after the senatorial elections of June 2013, Adamou Ndam Njoya held a press conference on many issues. He talked about politics and the flood victims in Maga, in the Far-North. At the end of this conference, audiovisuals media, among which were Equinoxe TV journalists, interviewed him.

It was revealed that on October 7, he was not particularly keen to speaking to the media. He was however brief and did not utter the statement being shared on social media.