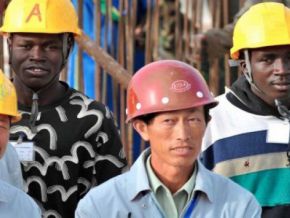 It is said on social networks that this company in charge of the construction of the first phase of the Yaoundé-Douala motorway does not offer social security cover to its 516 staff.

The Chinese company China First Highway Engineering Co Ltd (CFHEC) in charge of the construction of the first phase of the Yaoundé-Douala (20 km out of 215 km in total) has been under high scrutiny these last weeks. After stopping its activities in April 2017 on the motorway worksite due to lack of payment, it has pointed on social networks as a company who does not respect the rights of the Cameroonian workers it employs.

On 2 June 2017, the Ministry of Public Works (MINTP), the public contracting authority for the project, investigated the company. The result of said investigation is that “labour relations are currently healthy. Out of the 516 Cameroonians working on this site, over four hundred people are already registered with the Caisse Nationale de Prévoyance Sociale [CNPS – Social Security]”. And the registration is underway for the remaining workers.

Regarding the emploees temporarily laid off by the company on 29 April 2017, MINTP assured that “these employees have not been dismissed. They were temporarily laid off following the suspension of several workstations which could be operated during the rainy season, the workers will restart work after the rains end”.

The Ministry specified that, regarding this issue of temporary lay off, it is good to know that this process is common in the civil engineering sector. During certain periods, some workers are made to stop work, to limit costs.