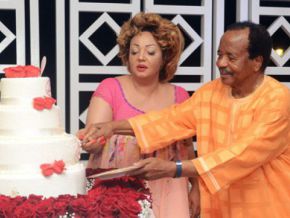 Is this a picture of the cake-cutting during Paul Biya’s 85th birthday?

People claim that this is the picture of the cake-cutting during Paul Biya’s 85th birthday. True?

On February 13, 1933, Paul Barthélémy Biya was born in Mvomeka in South Cameroon. So in recent years on February 13, many Cameroonians want to know how Cameroon’s president, celebrate his birthday. In the evening of his birthday celebration, they share pictures of the cake-cutting.

This year, however, the picture being circulated is not the real one. It is one of his wife’s birthday on December 4, 2016.

On the image, Paul Biya is seen in a pink robe. On the real images however, he can be seen in an electric blue suit cutting a three-layer cake with red and white ornaments and the number 85 on top, near his wife Chantal Biya.

Let’s note that the president’s birthday picture is always published on prc.com, the website for the presidency.